Home/First Frogspawn of 2017
­
Previous Next

Inis ecologists observed mating frogs and recorded our first frog spawn of 2017 during a site visit in Co. Cork today. We saw frogs and spawn in two pools which had formed along a forestry firebreak.

We located a total of 5 adults between the two pools. A male was heard croaking and seen locked in the amplexus embrace with a female on approach to the first pool, but the frogs quickly retreated to the bottom of the pool. Some moved under pondweed leaves while others attempted to burrow into the muddy pool bottom, covering themselves in a layer of mud, making them difficult to spot. 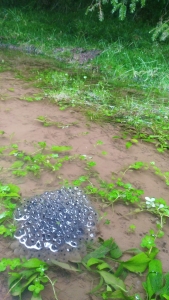